Oprah protested for endorsing face cream made from foreskins 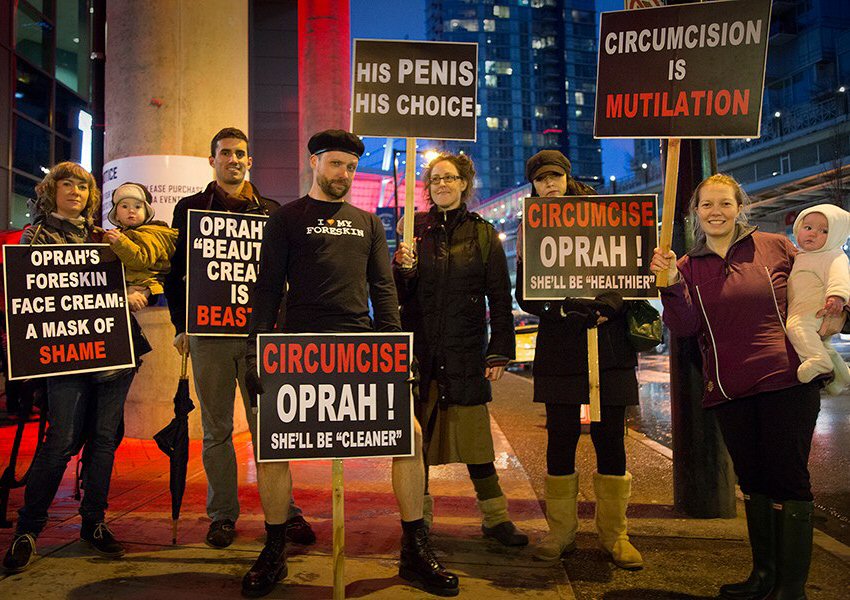 VANCOUVER – Her advice may be followed by hordes of people, but a Vancouver group wants Oprah Winfrey to explain why she has endorsed an anti-wrinkle cream made with human foreskins.

Winfrey makes her first appearance in Vancouver on Thursday before a sold-out crowd at Rogers Arena.

But as crowds pack into the stadium, Glen Callender, founder of the Canadian Foreskin Awareness Project, will be outside with his supporters protesting Winfrey's support of SkinMedica.

Callender says it’s hypocritical of Winfrey to speak out against female genital mutilation, while saying it’s all right to use a face cream made from foreskins from circumcised infant males.

“Imagine how Oprah would respond if a skin cream for men went on the market that was made from parts of the genitalia of little girls,” Callender said. “That would be an outrage and rightly so.”

Callender expects “a dozen to two dozen people” to attend the protest.

Advertisements for SkinMedica say Winfrey has described the product as her “magic fountain of youth and miracle wrinkle solution.” Winfrey didn’t immediately respond to an email asking for comment.

The makers of SkinMedica have said they use foreskin fibroblast — a piece of human skin used as a culture to grow other skin or cells.

“I would like Oprah to come to her senses and realize that all children have a fundamental human right to keep all their genitalia and to decide for themselves if anything gets cut off,” Callender said Wednesday.

Callender describes the Foreskin Awareness Project as Canada's “feistiest pro-foreskin advocacy group” with the goal of “foreskin education and appreciation.”
Posted by Anonymous at 4:39 AM