At around 3 pm today, a bearded man dressed from head to toe in white clothing stood in the crosswalk at Wall and Riverside Avenue in downtown Spokane. Above his head he thrusted a sign that read "CIRCUMCISION CRUELTY TO BOYS."

But it wasn't his sign that every passing car or pedestrian was staring at. It was the giant red stain at the crotch of his pants.

The man, whose legal name is Brother K ("K stands for kind," he says), drove here from Sacramento, Calif., to lead an anti-circumcision demonstration at Grand Pediatrics, a South Hill children's clinic, tomorrow morning. Brother K, 65, says he first became aware of the Spokane clinic after seeing a Facebook post from a nurse practitioner there that read, "Did my first circumcision on Friday … watch out boys … here I come." 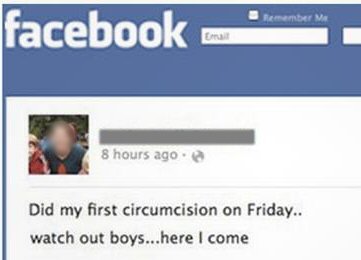 Brother K says that post went viral — attracting ire from anti-circumcision activists from around the globe — before it was removed.

"It’s like she’s gloating. She’s enjoying it," he says. "She has no appreciation that she’s ripping open a human penis."

Brother K says he fundamentally objects to circumcision practices — a practice that is becoming more and more controversial among new parents.

"Right now if you did to a girl what you did to a boy, it would be a major, major felony. You would go to jail."

Brother K has been part of the long-running anti-circumcision movement since the 1970s. And after seeing the Spokane nurse's post, he felt impassioned to travel here to demonstrate at the clinic tomorrow. He says the nurse's post enraged him because of "the fact that we see a woman who is preparing a lengthy career in circumcising boys."

Though Brother K was holding his sign silently and only standing in the crosswalk when the light was red, he was certainly getting attention. Drivers slowed to take photos. As we talked, a tall young man walked up and said, frankly, "I kind of agree with you!"

He says he will attend a large-scale protest of circumcision practices in late March for Genital Integrity Awareness Week. Outfits like his — all white with just a red spot at the crotch — are what he and his fellow protestors wear, he says.

For now, it looks like he and 11 others have RSVP'd to the Facebook event for tomorrow's protest.

The Inlander contacted Grand Pediatrics to speak with the nurse, who they say is currently on vacation. An office manager says she was aware of the original posting, which has since been removed. The clinic was not aware of any demonstration plans.

As we wrapped up our conversation with Brother K, a girl with pink hair walked past, muttering "your dick's red, by the way."

He shrugged her off.

"We’re gonna hold the circumcisers' feet to the fire," he says. "People are outraged."
Posted by Anonymous at 7:40 PM