A VICTORIAN councillor has tweeted graphic female genital mutilation photos to a supporter of a controversial mosque development.

Bendigo councillor Elise Chapman has been outspoken against Islam in her campaign to stop a $3 million mosque development approved by Bendigo City Council in June 2014.

A mosque supporter had sent a message to Chapman on Twitter saying she hoped the mosque would get built soon.

“It’s great to see someone who cares about all Bendigo residents and their religions,” the supporter tweeted.

“Oh, we could have this here too? Would you like your fanny sliced off,” she captioned the photo. 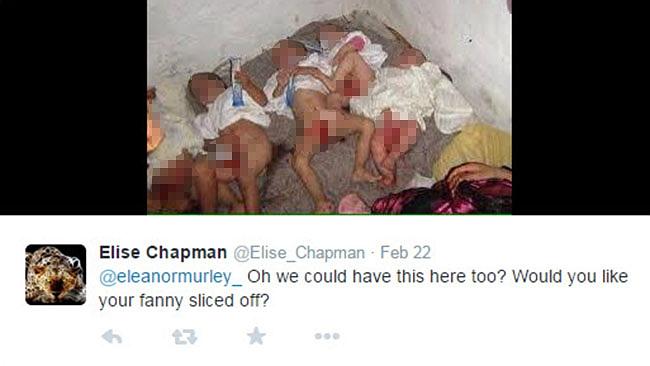 The graphic tweet that has generated so much reaction Source: Twitter  [Elise Chapman has since had her Twitter account suspended.]
Ms Chapman was one of two councillors who voted against approving the mosque, which would include two prayer rooms, a shop and community sports centre.

The project has been the subject of vocal protests and a social media campaign from opponents, including 350 who submitted formal objections to the council.

About 40 letters of support were also received.
Victorian Civil and Administrative Tribunal hearings into the development are ongoing.

[Apart from Ms Chapman's Islamophobia, only one problem with this story: the picture shows boy babies who have just been genitally cut ("circumcised"). Here is the original from here (NSFW). 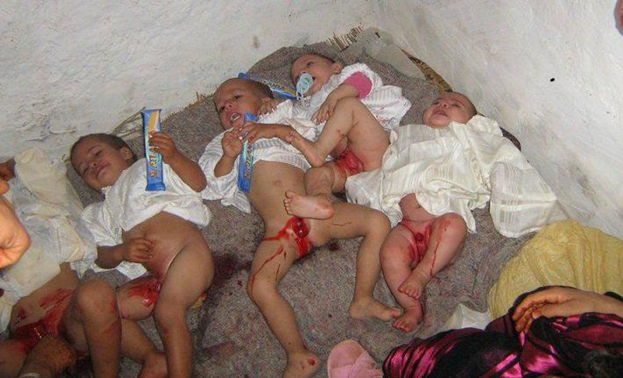 Click to enlarge.
Will learning this change Ms Chapman's view of male genital cutting? Or female? Since the firestorm this generated may have ended her career, does it matter?]
Posted by Anonymous at 12:38 PM