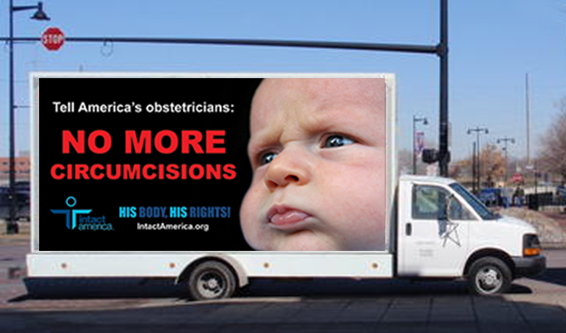 Genital autonomy activists have gathered in New Orleans to call on the American Congress of Obstetricians and Gynecologists (ACOG) to join the global medical community’s movement away from neonatal male circumcision.

Intact America held a press conference, placed an advertisement in the New Orleans Times-Picayune and used a mobile billboard, saying “Tell America’s Obstetricians – No More Circumcision.” The sign includes the message “His Body, His Rights” to underscore the organization’s human rights concerns. Approximately 70 activists were expected to take part in the demonstration, displaying banners, carrying placards, and handing out literature

Executive director Georganne Chapin said, "The leaders of ACOG apparently do not think their members – who, according to estimates, perform at least half of the one million circumcisions in the United States on unconsenting baby boys each year – should hear the arguments that have led medical authorities across the developed world to reject the surgery as unnecessary, inherently risky, and a violation of baby boys’ right to an intact body."

The ACOG rejected IA's application to rent space for an educational booth in the convention’s exhibition hall, saying male circumcision “is only indirectly related to women’s health and of only casual interest to members of ACOG.” So Chapin decided Intact America should communicate with ACOG directly.

“It is both sad and disingenuous that ACOG claims circumcision is of no interest to the very doctors who perform the surgery hundreds of thousands of times each year,” Chapin said. “It is also not surprising they have embraced the widely-discredited 2012 circumcision policy statement of the American Academy of Pediatrics (AAP)." That policy "lauded the benefits of circumcising infants, while admitting that evidence for such benefits is lacking, acknowledging that the risks have never been adequately studied, and ignoring the ethical problems inherent in permanently removing normal genital tissue from individuals who cannot consent.”

The AAP’s policy was endorsed by ACOG. In contrast, IA endorses the view of 38 international pediatricians, urologists and medical ethicists, whose response to the AAP is published in the its own journal, Pediatrics

“There is growing consensus… that physicians should discourage parents from circumcising their healthy infant boys,” the physicians say, “because non-therapeutic circumcision of underage boys in Western societies has no compelling health benefits, causes postoperative pain, can have serious long-term consequences, constitutes a violation of the United Nations’ Declaration of the Rights of the Child, and conflicts with the Hippocratic oath: primum non nocere: First, do no harm.”

“Intact America’s intent for this demonstration in New Orleans,” said Chapin, “is to make sure ACOG hears and understands the ethical quagmire they have put themselves into.”
Posted by Anonymous at 5:21 AM