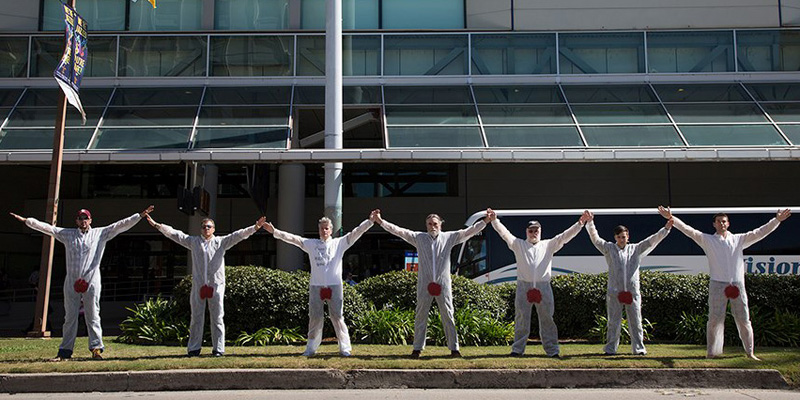 NEW ORLEANS — Pediatricians gathered here for the American Academy of Pediatrics convention were greeted by protesters urging the medical group to rethink its position on an issue that makes most people squirm: the circumcision of newborn boys.

And although the American Academy of Pediatrics doesn’t recommend routine removal of infants’ foreskins — that has been its stance since 1999 — its report, released two months ago, does cite literature saying that the procedure can prevent [some] urinary-tract infections, cancer of the penis and sexually transmitted diseases, including AIDS.

Such benefits, the report says, justify its coverage by private insurance and Medicaid. But opponents, who call themselves “intactivists,” go beyond mere opposition to the circumcision of healthy infants.


“We say that it’s a human-rights violation to tie down a baby and cut off part of his penis,” said Georganne Chapin, the founding executive director of Intact America, which held a press conference and rally outside the convention on Saturday (Oct. 20).

The AAP convention continues through Tuesday.

Data suggest a decline in the percentage of American newborns undergoing the procedure.

Anthony Losquadro of Brooklyn, N.Y., who spoke at Saturday’s rally at the convention center, said it represents a shift in public opinion.

“Like any change in culture, it takes time,” he said, “but I think people realize that babies are born intact and you don’t need to correct a perfectly functional body part with surgery.”

The authors did not take a position on whether newborns should be circumcised. [Everything but...] They also took pains to point out that the data they used didn’t include circumcisions performed outside hospitals, such as those required for boys born into Jewish and Muslim families.

But the reason for the procedure doesn’t matter, said Chapin, whose organization opposes all medically unnecessary circumcisions.

“Our organization is not going after Jews and Muslims,” she said. “We’re saying that all babies are entitled to protection.”

Among the speakers at Saturday’s protest were men who were circumcised days after they were born and still profess to be upset by it, even though the procedure occurred decades ago. [Way to dismiss their human rights! Have their foreskins grown back?]

“I do feel a sense that my rights were violated on my second day of life,” Losquadro said.

The foreskin has a role, he said, because it covers the tip of the penis — he likened this role to that of an eyelid — and because it has cells that alert the immune system to potential trouble.

“It evolved for a reason,” he said, “and it’s foolish for doctors to assume that it’s an unneeded flap of skin."

Saturday, the second day of our protest, two AAP officials convened with police and security guards in front of the convention center. A couple of Intactivists were able to overhear some of the conversation. They asked the police if we could not be forced to leave the area. The police told them no, that we were marching on public property, and that we were breaking no laws.

I actually went up to the man, extended my hand, and introduced myself as Georgnne Chapin, executive director of Intact America. He refused to shake my hand and said, "So what?"

I said I just wanted to introduce myself and I would like to know his name. He said, "I don't agree with anything you do or say," turned on his heel, and walked away.

We had the equivalent of an outdoor, public booth across from the Center; it was a streetcorner, next to an outdoor parking lot, which was next to a Marriott Hotel. On Friday, we had received permission from the lot owner to hang our "I Did Not Consent" banner, and other signs on the chain link fence.

Around an hour after the AAP officials' unsuccessful attempt to get rid of us, the valet from the Marriott came and told us that the owner of the parking lot said we were trespassing and had to take the banner and signs down.

Dan Bollinger asked to speak with the owner who "didn't have time" to talk with us, but asked the valet if he could give us the guy's number. Dan called him (turns out it was the manager, not the owner), and had a very pleasant conversation, which ended in him agreeing to extend the permission for us to have the signs up for two more days. (We paid him a small fee.)

We are certain that the AAP also had complained to the Marriott, which is what sparked them to contact the parking lot manager (who clearly felt he didn't owe the AAP anything). Very nice. All of that said, we had some good conversations, and I felt that by being on the street rather than in the convention exhibit hall, we were free to say all the things we believe.

Earlier story
Posted by Anonymous at 4:05 AM