By Hugh Young
Tweets from within the American Academy of Pedriatrics Convention indicate the only presentation on circumcision included a pro-intact message.

While Dr Yves Homsy of Florida was presenting on "Pros and Cons of Doing Circumcisions", a session described as aiming "to explain what one needs to do in order to set up a program to do neonatal circumcisions and how one can become an expert circumciser" one of the audience, Dr Daniel Flanders of Toronto sent a picture of Dr Homsy's opening slide. 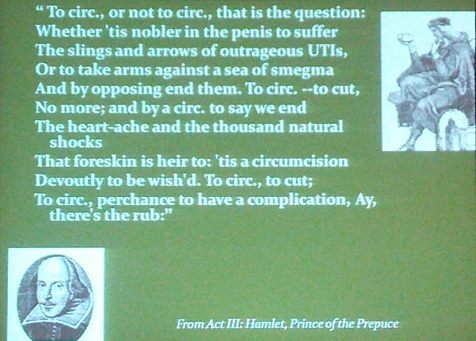 Since this is a standard pro-circumcision meme, Intactivists assumed Dr Homsy was toeing the AAP party line on circumcision, but Dr Flanders Tweeted:

Dr. Homsy: Those who oppose circumcision are conveying an important message and their voices should be heard

Queried that this was hardly the message in the session's abstract, Dr Flanders Tweeted: "I noticed that discrepancy as well. The lecture was not as described in the program. Focus was on medically necessary circ."

Challenged on his own views, he Tweeted: "My personal views are irrelevant. Professionally, I do not do circumcisions."


42 years later, the message is unchanged


At the weekend in New Orleans, Jonathon Conte of San Francisco carried an inflammatory sign outside the American Academy of Pediatrics convention: "Sex Criminals for Hire: Inquire within".

It is the same message that pioneer Intactivist Van Lewis was arrested for carrying.

Van and his brother Ben were outside the Tallahassee Memorial Hospital on December 16, 1970. He and his brother Ben carried signs also saying "Infant Circumcision is a Sex Crime. Abolish it." "Abolish Infant Circumcision." and "Men's Liberation" outside the Tallahassee Memorial Hospital, Tallahassee, Florida. They were charged with disturbing the peace and spent a day in the cells.

In 2010, Van Lewis told James Loewen about his arrest:


Van Lewis died in Tallahassee, Florida on June 6, 2011 of pancreatic cancer. He was 68. But his soul goes marching on.

Earlier story
Posted by Anonymous at 5:04 AM