WASHINGTON DC: Circumcision for AIDS is a boondoggle - and read the small print

Just imagine that a simple, harmless, one-time medical procedure could provide you, your loved ones, and all your neighbors with lifetime protection from a deadly epidemic. You’d sign up for it right away, wouldn’t you?

This is precisely what the World Health Organization, the Bill & Melinda Gates Foundation, and countless other NGOs and government programs are offering the continent of Africa: A comprehensive adult male circumcision campaign aimed at stemming the devastating HIV/AIDS epidemic. According to the WHO, “Medical male circumcision reduces the risk of female-to-male sexual transmission of HIV by approximately 60%.” Moreover,
Thanks to the WHO’s lobbying and financing efforts, countries across Africa are submitting thousands of their male citizens to the operation. Uganda, which has a 6.5% adult infection rate, launched a giant voluntary circumcision program in 2010. In June, 2012, ten Zimbabwean parliament members announced that they would undergo circumcision to set an example to the population as a whole. More than a million Zimbabweans are living with HIV/AIDS.

This is indeed marvelous news. The way Bill Gates and the WHO describe it, circumcision sounds like the greatest invention since penicillin. And yet the story does raise a question: Is it true? Does circumcision really reduce the transmission of HIV/AIDS, making it serve as a sort of invisible condom?

In fact, the pro-circumcision consensus the WHO implies in its statements is largely imaginary. Medical experts the world over doubt the wisdom of the campaign, and some studies suggest it is actually counterproductive. In May of 2011, the Panos Eastern Africa NGO determined that misconceptions about the procedure – specifically the widespread notion that circumcision alone, without taking additional precautions, significantly protects people from HIV/AIDS – was actually encouraging the disease to spread in Uganda. In December of 2011, an article in the Australian Journal of Law and Medicine cited grave flaws in three studies supposedly proving the benefits of male circumcision in reducing the spread of HIV/AIDS in Africa: “The trials were compromised by inadequate equipoise; selection bias; inadequate blinding; problematic randomisation; trials stopped early with exaggerated treatment effects; and not investigating non-sexual transmission.”
Furthermore, the authors discovered that
There is also a concern that the procedure itself can spread the disease among participants and their sex partners if it is not performed under completely sterile conditions and combined with qualified followup care.

So is the Great African Male Circumcision Crusade a boon or a boondoggle? In order to cast some light on what appears to an extremely murky and emotional issue, I contacted Dr. Ronald Goldman of the Circumcision Resource Center in Boston to get some hard answers:
Dr. Goldman, a number of sub-Saharan African nations have begun a crash adult circumcision program aimed at drastically reducing the incidence of HIV/AIDS among their populations. Their leaders, encouraged by foreign governments and NGOs, have apparently convinced themselves that a circumcised penis is practically immune to the virus. What effect do you think the mass circumcision of African men will actually have on suppressing the illness?

Many professionals have questioned the reliability and validity of studies claiming that circumcision reduces HIV transmission. African national population surveys in eight countries found a higher rate of HIV infection among circumcised men compared to men who were not circumcised. There are at least 17 observational studies that have not found any benefit from male circumcision in reducing HIV transmission. Therefore, I do not expect a reduction in HIV transmission. It's even possible that the incidence of HIV transmission will increase because the mistaken belief of protection from circumcision will result in more risk-taking sexual behavior.

In the United States particularly, circumcision has long been regarded as a sort of “magic bullet” against disease and a host of other evils. Why do so many health professionals believe the procedure is so beneficial to society as a whole?

Actually, only a relatively few health professionals believe that circumcision has significant health benefits. Most doctors take a neutral approach to circumcision, following the recommendations of the American Academy of Pediatrics. The AAP is considered to be the highest authority on the subject, but their recommendations also have problems. For example, their current policy is not balanced and uses about ten times more space on the "potential benefits" than on the harm. In addition, there are many questions of harm that have not been studied. Because circumcision is common in the United States, there is a strong psychological motivation to believe it is harmless or beneficial.

Since circumcision is a religious duty among Jews and Muslims, do you see any religious ramifications to this policy? For example, could non-Muslims see it as a covert conversion campaign, or could the practitioners believe they are performing “God’s will”?

I don't think so. What is covert about the campaign is that circumcision is being promoted by circumcision advocates that have personal, religious, political, and financial conflicts of interest. They intended to find a benefit for circumcision, and they found it. As I have written elsewhere, there is a strong pro-circumcision bias among those who are circumcised, have circumcised sons, belong to circumcised groups, or have performed circumcisions.

What potential drawbacks or side effects do you anticipate from this wholesale circumcision campaign?

Many of the psychological, sexual, and social effects that I discuss in my book, Circumcision: The Hidden Trauma, could become more common as circumcision becomes more common. We expect that though men may choose circumcision now for themselves (based on misinformation about protection from HIV), the campaign is moving toward forcing circumcision on infants who will then have no choice. This is the source of the trauma. Imagine being forcefully held down and having the most sensitive parts of your genitals cut off. Trauma is remembered by the body and has long-term effects. Feelings, attitudes, and behaviors are affected. For example, some men are angry that they are circumcised. Other men are angry and don't know why. That repressed anger has many effects on their lives and the lives of others.

Condoms have proven to be vastly cheaper and far more effective than circumcision when it comes to reducing the spread of HIV/AIDS, and they also reliably prevent other sexually transmitted diseases as well as unwanted pregnancies. Why aren’t the UN and the Western nations showering Africa with condoms instead of removing men’s foreskins in what looks like an unprecedented social engineering experiment?

There is a lot of psychological motivation behind the advocacy of circumcision. Circumcision is traumatic. Psychologists know that there is a compulsion to repeat trauma on others. Some American circumcised men have placed themselves in administrative and research positions where they can act out this compulsion and influence many others to be circumcised. They are simply using the cultural beliefs and values (e.g, medical studies and authorities that claim that circumcision has benefits, etc.) to accomplish their goal.

As most people probably know by now, so-called female circumcision (a.k.a. female genital mutilation or FGM) is a much more radical procedure than the male version, frequently including the excision of the labia and even the clitoris. Do you see a possibility that government and NGO support for male circumcision could potentially water down campaigns targeting FGM?

I do not think so. I point out that the cutting of male and female genitals are qualitatively the same thing. The harm and violation start with the first cut.

If male circumcision is as harmful as you claim, does this mean that all male Jews and Muslims, not to mention tens of millions of Americans, are essentially “damaged goods” when compared to their non-circumcised contemporaries?

What circumcised cultures do not want to know is that a natural body part, in this case a penis, functions better than a surgically reduced one. We do not need studies to know this. It's just common sense. For example, if we cut off the thumb, the functions of the hand would be adversely affected. It's the same for the penis. Most American circumcised men (and doctors) do not know what they are missing. Based on recent reports, circumcision removes up to one-half of the erogenous tissue on the penile shaft, equivalent to approximately twelve square inches on an adult. Medical studies have shown that the foreskin protects the head of the penis, enhances sexual pleasure, and facilitates intercourse. Cutting off the foreskin removes several kinds of specialized nerves and results in thickening and progressive desensitization of the outer layer of the tip of the penis, particularly in older men.

The current African circumcision drive is being generously financed by the UN and WHO, foreign and national governments, and a variety of NGOs. It is big business for those involved and money, as they say, is the root of all evil. Would it be cynical to speak of a “circumcision-industrial complex” at work in Africa?

Certainly money is an important factor. An African official said, "Profiteering has trumped prevention." A WHO researcher said that billions of dollars have been wasted. The focus on circumcision reduces support for more effective measures.

Has anyone, aside from yourself and a handful of other circumcision skeptics, openly challenged the policy and called for resistance?

There are other serious problems that prevent a fair and open debate. Circumcision advocates have access to much money, and American media, reflecting the pro-circumcision bias of the culture, routinely ignore stories critical of circumcision and focus on reports of circumcision "benefits." Journalist regularly violate their professional principles and obligations to report different views on this controversy.

If the circumcision program is indeed misguided, what alternative advice would you give to African governments seeking a viable solution to the HIV/AIDS crisis?

Most HIV infection in Africa are transmitted by contaminated injections and surgical procedures. The advice is simple: sterilize any instrument that will be used on a person's body. Condoms are better than 99% effective, less invasive, and the cost of one circumcision in Africa can pay for 3000 condoms. Unlike circumcision, condoms also have the advantage of also protecting women, and there are no surgical risks and complications. Even the pro-circumcision studies recommend using condoms in addition to circumcisions. With a condom, circumcision adds no significant additional protection value even if the advocates' protective claims for circumcision without condoms are true.

Ronald Goldman, Ph.D. is a psychological researcher, educator, and Executive Director of the Circumcision Resource Center in Boston, a nonprofit educational organization. Dr. Goldman is internationally known for his work on circumcision and is the author of Circumcision: The Hidden Trauma and Questioning Circumcision: A Jewish Perspective. He gives lectures on the psychosocial aspects of circumcision, counsels parents and circumcised men, and has participated in over two hundred interviews with broadcast and print media.

At the AIDS 2012 conference they were handing out samples of posters (which also illustrated the above interview) being used in Africa, designed to stigmatise intact men: 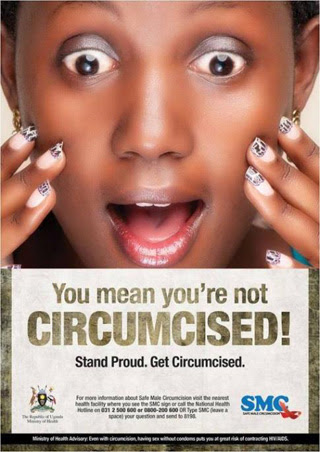 Note the soothing "Even with...." Here's where "even" should go: "Circumcisng men may put women - already at greater risk of HIV/AIDS - at even greater risk.